Well I just finished an unexpected painting a couple days ago that sent me on a strange direction in my work. About 6 months back I received stretcher bars from a soon-to-be-departing and dear Banana-Factorian, Alison Bessesdotter. These bars sat in my studio for months taunting me until I remembered a challenge another friend, Tyrone Webb, gave met to paint a painting that had a space or fantasy theme. Tyrone and I often speak about the relative dearth of artwork in our little corner of PA that deals exclusively with a Sci-Fi or pure fantasy theme. Is there discrimination out there against artwork that is fantasy based? Who knows. I suspect such work is considered escapist and maybe cheap on some level by some. I certainly dispute that interpretation. In any case I decided to take Tyrone’s challenge on and finally confront Alison’s stretcher bars and throw caution to the wind to paint yet another big-ass painting.

In this work I employed what is becoming a rigid strategy of doing elaborate under-painting while also dealing with complaints from friends and other artists I know about how I bury layers of work that they think are terrific. Its become such a routine most of my friends don’t even comment of what they think of my works (unless I ask) until the end because they know I”ll likely paint over it. I still regard these under-paintings I’ve done now for years as a kind of spell I cast on the piece that makes the work stronger for the effort. How great is it to not be so wedded to something you’ve created that you don’t mind completely destroying it for the chance that something better might come in its place. The strength of this particular work (the moon piece I just made) and the encouragement I received while painting it has inspired me to begin a general series of similarly sized large paintings of the entire solar system. I’m thinking of calling the series “Friends are my Solar System”, with each painting representing a good friend, since the first piece was dedicated to my friend Tyrone. I’m not sure when I’ll be able to get around to the next piece, but I know it would be of the sun and represent my friend Michelle Neifert.

Here are some process shots of my piece “Tyrone Dreams of the Moon and the Stars” along with the final piece. 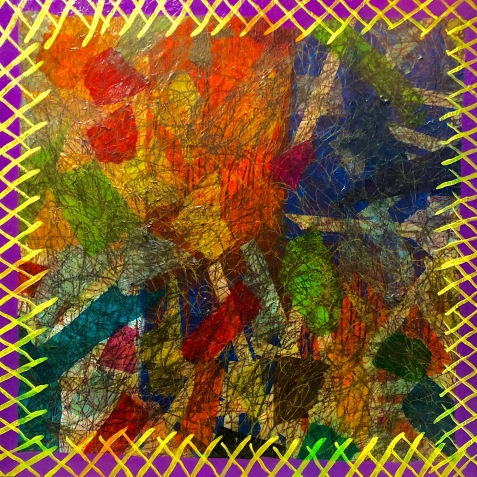 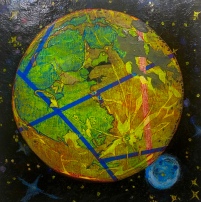 I’ve been in a Led Zeppelin mood again and found myself listening to CODA a lot lately. I particularly like the song “Darlene”. Here’s a YouTube video of it. Let me know what you think.

Okay I think I’ll next start working on a grant opportunity for which I am a finalist over the next few weeks and also turn to some springtime flower paintings. I also hope to soon begin my large sun painting as well. When I’m at a good place to blog on these efforts I will. I’ll leave you with this thought I’ve been having lately, and that is on the possibility of black abstraction (I’ve had some conversations lately that suggest there’s little appetite for contemporary abstract art from a distinctly Black perspective). I’m collecting my thoughts on this matter and want to talk about it and all the other subjects I mentioned soon. Until then, do be well.