This last First Friday at the Banana Factory was full of activity; of artists and visitors alike looking for deals as it was the last First Friday of the year and the last before Christmas. And I tried to get in the spirit as well, making over my studio and setting out smaller items for folks to peruse. I didn’t get any sales that night but did manage to sale a small work the day before to a collector of mine out in Colorado, so Friday felt a little celebratory to me. I felt like a real artist making it painting by painting, little by little, making my studio rent for December like a big boy. Here’s that painting I sold: 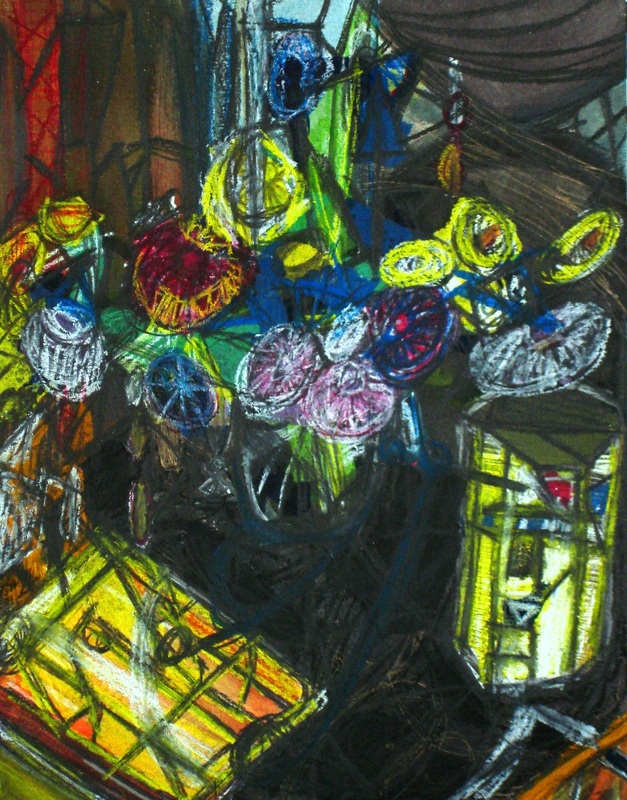 The open house began as it often does with a little pregame drinking in Deb Slahta’s studio for a little event we call whisky-o’clock, a variation on beer-o’clock but with better spirits. For this session several artists and I were bemoaning the changes and loss of staff taking place with the ArtsQuest staff and mulling over how non-for-profits treat their staff. A sudden departure of a ArtsQuest staff member promoted the talk.And, as an aside, I went to a birthday party on this last Saturday where this same topic was discussed but with the Allentown YMCA as the non-for-profit stand-in. There was no real solutions settled on in either of these discussions but the need for transparency, particularly within cultural institutions like ArtsQuest was agreed to be highly needed.

Once the crowds starting pouring in my first interesting conversation was with a veteran who often visits our studios. I found myself having to hold my tongue with many of this vets right-wing comments about the government and US foreign policy but we did find common ground in talking about art. We specifically chatted about the virtues of acrylics verse oil paints and about our recent sales – I’ve given him supplies in the past which he is already turning into sales and commissions. Though this vet is somewhat aggressive in conversation – that is to say he can capture a conversation – I do like that he sees the Banana Factory and the resident artists as a personal resource.

The visitors this last week were diverse and yet the same. We received a group of grade schoolers who made the building into a scavenger hunt, and came into each space on assignment hunting for particular works of art from each studio. We go a slew of New York transplants; one after another all leaving the city due to cost, like me. We got our eaters back, folks who came for the snacks alone – I tried not to mind it this time though I’m sure they could feel the shade it was given them as they came in.

I got one interesting mother and child who liked the first piece of my series “Matthew Likes Darkies Best”, this one here: 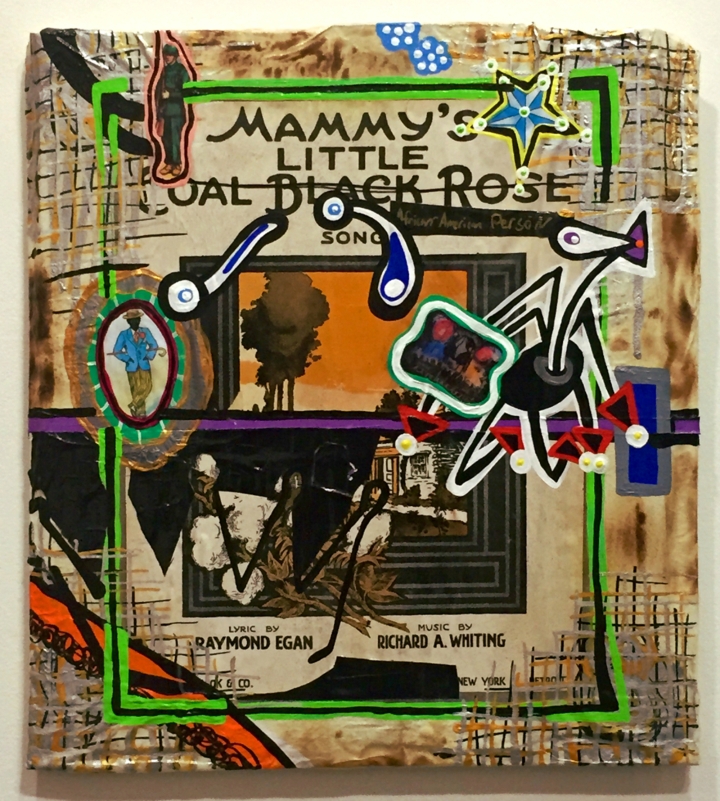 The mother wanted me to explain the story and I told her how it was the beginning of sheet music where a mother, much like herself, explained to her child that she was still beautiful even though she was black, but using racist language to do it all. I explained to her how the music was published in the 60’s though it has been a melody years before, and how it demonstrated how late racist attitudes persisted in the country. Then the mother and I discussed how the election of Trump is ushering in a new wave of racist sentiment in the country and how his election itself was a racist act. That was an intense conversation.

Later on I had a nice conversation with a woman that liked the layering in my works and said that it reminded her of Alice in Wonderland which I was delighted to hear. I do feel like I’m describing an odd sort of meta-world in my painting, not wholly alien but still strange and slightly dark. I told her I like to think I’m a character in the movie Pan’s Labyrinth, but Alice works for me too.

The night closed with tons of people popping in for brief visits and saying they liked the colors and layers. It was by far the biggest crowds for a open house that we’ve gotten all year and gave me hope as to the new direction I think ArtsQuest staff would like to take the event. There were carolers singing and Lehigh University and Nazareth High students that stopped by too. The last significant encounter of the night was when my friend Kim Christman and her friend stopped by.

Kim is another ex-New Yorker that was encouraged to move to the area by Gregory Coates, the same man that gave me my first show in valley. She stopped by maybe a half hour before the night was over and completely challenged my being at the Banana Factory. According to her the space is stiffing me creatively and sending me on directions that my real work does not want me to go in. I think she was referring specifically to the landscapes. I don’t agree with her completely but I do see how having a studio has changed me. Frankly its had a maturing effect to on my work, though its also made me less adventurous given that my every activity is done now with money not inspiration being a central concern. I appreciate that Kim sees me as a fellow artist though and wants the best for me creatively. I don’t know what I’ve done to deserve such good people looking out for my interests. So even though I believe I’m in a good place for now I see that there are some possible advantages to seeing if I can do art in other places besides where I’m at now.

Here are some pics of what my studio looked like on Friday. I tried to move more smaller work up to the from of the space. 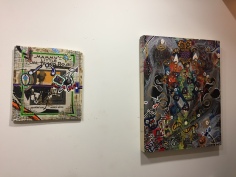 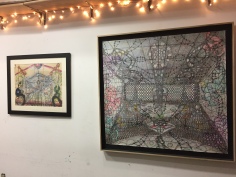 Okay, that’s it for today. I will shortly receive my funding which will allow me to finish up the Pilot Set of paintings so I’m excited that that saga can now begin in earnest. Look for me in the next week to blog about how that process is beginning. Until then do be well.