I was going through my phone today and realized I didn’t blog about my evening at The Dime restaurant two weeks ago. It was a nice evening with a few friends who came out. It happened to take place on the same night that the city of Allentown inaugurated its third Thursday gallery crawl, so I got a little foot traffic for my little one night showing.

The evenings theme or lesson to me and the reason I even wanted to blog about it was getting over my insecurities about self promotion. For the majority of the evening I chatted with familiar friends staying tightly within my comfort zone. That is until a couple friends suggested I stand next to my work and mingle a bit. Adrian Shanker the executive director over that the Bradbury-Sullivan Center had to give me the same advice during my opening a couple weeks prior. In both cases I managed to sale small works after engaging in genuine conversation and showing interest in the buyer. In the case of my Dime show a restaurant hostess bought a small piece of work that I had to be encouraged to bring to the event. So again the lesson learned is that engaging with my audience doesn’t cheapen me or the work and is often key in securing a sale. Additionally any fear I might have in talking up my work with a buyer or talking with them about what brings them to art is due in large part to me not thinking I’m good at small talk. And finally I learned yet again that small works sale faster than larger pieces, which should be obvious to me at this point. Here’s me with Ana Hamilton – the curator of art events at the Dime – and Michelle Neifert. 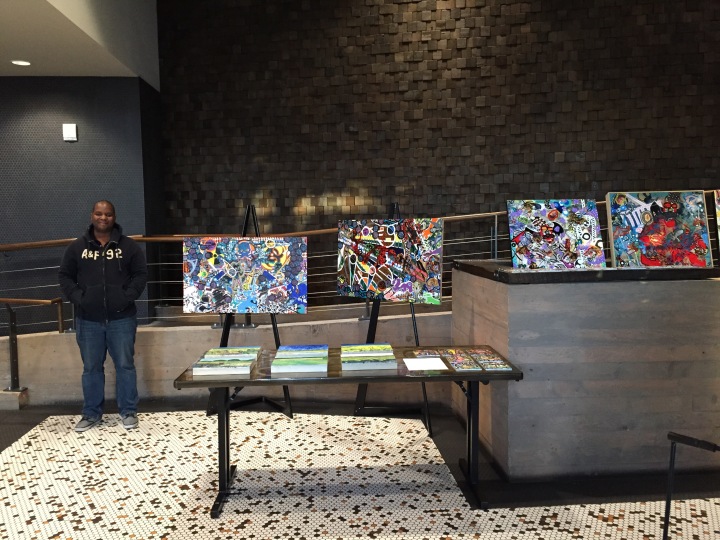 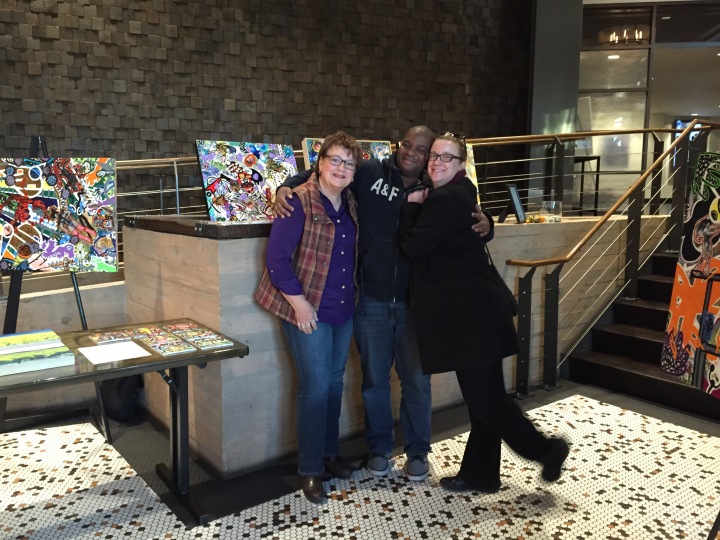 Sharon Jones, of Sharon Jones and the Dap Kings, just passed away, and at a mere 60 years old I have to say she died too soon. Jones is an inspiring artist to me – aside from her excellent and soulful voice – because she was a late bloomer. Stories of wunderkinds seem to capture the public imagination because we’re so youth obsessed in our culture. Its more amazing to me, though, to witness talent that takes years of struggle to nurture especially since our society is so hostile to artists who aren’t developed and famous say by 25. I fell in love with Sharon Jones about ten years ago along with Nicole Willis and the Soul Investigators. Both artists mixed earthy blues with rock and funk elements which made them innovators in my mind rather than revivalists as they are unfairly categorized. Here’s one of my favorite Sharon Jones and the Dap Kings songs 100 Days/100 Nights

Alright that’s it for this post. Friday is First Friday once again and our last one of the year. I’m hoping for big crowds for this holiday open house. Until then do be well