I’m catching up on some of the suggestions that visiting and resident artists gave me at the the Vermont Studio Center in this blog. I received ten good suggestions that I’d like to cover over three posts. Here’s the list I used whenever someone gave me a suggestion at VSC. I’ve been carrying it around in my laptop for two weeks to remind me to follow up on these artists. 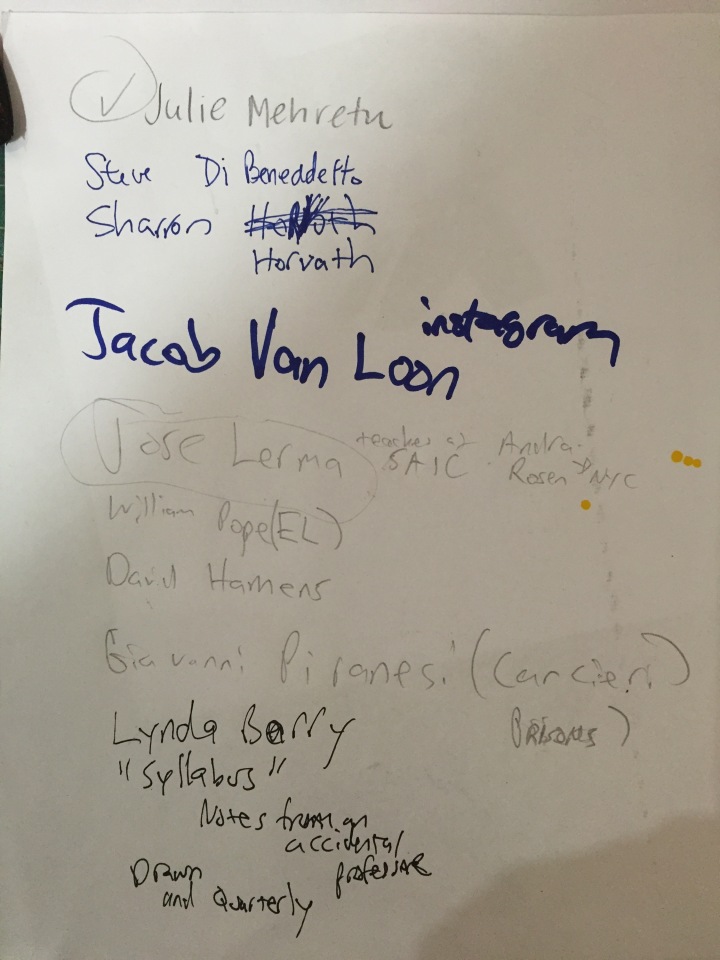 Mehretu says that she starts her works with a general geometric theme that helps her build a ground for her works. She then combines these initial sketch marks with architectural gestures to continue to build her surfaces. Mehretu’s process seems to be very intuitive. She says that she lets the painting direct her after she lays down her initial structural marks, in that way we are very similar. We also share an interest in building a surface using a series of layered marks that are then superimposed to build a system or structure. Mehretu’s works feel like the engineering schematics of a large machine, or similarly complex alien creature. Here are a couple images from Mehretu that I like:

Here’s an interview with Mehretu at the Deutsche Guggenheim in Berlin:

The artist Steve Di Beneddetto is also structural in his painting style, however in his case  he seems to following in a more organic direction. I get a sense in his work that he’s trying to keep painting rooted to some sort of materiality or definition while making works that push the boundaries of what a picture plane can contain. He seems to have a need to describe paintings complete potential in every work. He’s an incredibly ambitious painter combining great structure and color in his work with a cleverness that doesn’t feel smart-alecky. I found this interview on Di Beneddetto earlier today. Its an interview with David Humphrey in the art magazine “Bomb”. You can see the whole interview here. I think this pretty nicely encapsulates his painting mission.

David Humphrey: You’re constantly toying with the limits of order, of genre, and I feel that at this moment in contemporary art, any idiom is possible. The historic narratives that used to fuel artists and propel their work have collapsed, and you are optimizing that state.

Steve Di Beneddetto: Thanks. Well, to me painting is this ultra-elastic material—

David Humphrey: Even at the level of the material’s gooeyness, right?

Steve Di Beneddetto: Physiologically, its potential is endless. But I feel strongly that the works must maintain their integrity as paintings. I don’t find the idea of distorting the physicality of the thing all that interesting. It’s the same with music. I’m not such a fan of experimental or downtown art-rock. Like when trash is used as a drum set.

David Humphrey: So for all your interest in collapsing idiomatic limits, why do you still prefer to have a four-square painting and its depictive schema?

Steve Di Beneddetto: I think of it as containment. Virtues or values that come from holding things that want to explode in place.

Here are a couple pieces of Di Beneddetto’s that I like:

In Sharon Horvath there seems to be a painter who is in the world-crafting business like myself, though what I think I get from her works is a sense of the microscopic or galactic rather than the territorial as in many of my pieces. Meta-structures are definitely present in her art, like with Mehretu and Di Beneddetto, but these structures are more solid and not as translucent and atomized in her paintings. These amoeba structures seems to float in some kind of oozy super-pastel miasma. There’s a really interesting interview of her at the blog “Beer with a Painter“.  In it she says the following about time as a material that speaks volumes to me about her overall process. She says…,

Everyone has a relationship to time.  Earlier, we were talking about slowing down.  That is a material to work with, especially because art is a stationary object, it draws attention to all the movement around it.  I guess that is why people like to stare at waves — to see the movement, the gentle repetition.  Don’t they seem like units of time, when you see the waves crashing like this?  They are so abstract.

Ben La Rocco wrote glowingly of Horvath’s work in the Brooklyn Rail for her 2009 show at Lori Bookstein Gallery in New York. In it he says…,

Horvath offers images of our world as I perceive it at those moments when I am most appreciative of being a part of it. Richly optical, full of enticing complexity, intense color, and fascinating characters, Horvath paints the world as it looks to me when I am at my best. These paintings are devoid of cynicism.

I thought this was a beautiful sentiment for someone to take away from observing an abstract painting. I was compared to Horvath, no doubt largely for the color stories we share in our works, but I am far from un-cynical in my paintings. In fact cynicism is my bread and butter. I agree with La Rocco that there’s something gentle and angelic in her works. Here’s some pieces of hers that I like: 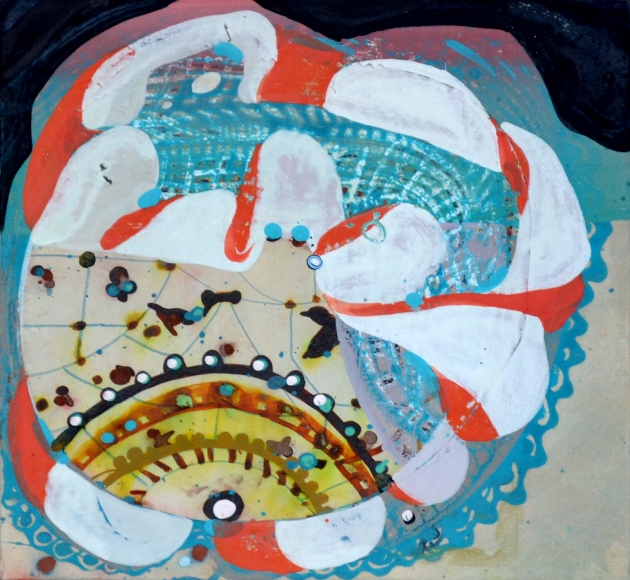 I’m still listening to M.I.A. a lot. Maybe too much. My friend King thinks I’m going tribal. I did break away from her a couple days ago to listen to some more jazz. I’ve been pretty lazy musically and going with whatever Amazon and Pandora recommends. When I tore myself briefly from M.I.A. a couple days ago I asked Pandora to find me something like Coltrane’s “Mr. Syms”. The algorithm   spat back some more Coltrain, this time this piece called “Mr. Knight”, which is lovely. It also gave me Gini Wilson and this nice little number called “O Town Blues”.  Here are their respective YouTube videos:

Okay I’ll continue over the next few posts to finish my list and to go into what I’m doing in the studio now. First Friday is this week so I’m hoping for some interested stories to tell from that night too. Until next time…