I’ve been sitting on a lot of content that I’ve been wanting to talk about since returning from Vermont two weeks ago and I finally feel like I’m in a place where I can do some blogging. The last week has been dominated by work and finishing an artist grant to the Lehigh Valley Arts Council to complete the Pilot set of paintings. Currently I’m on the fifth piece in the set of eight and I’ve asked the council to give me a grant for $2500 to complete the final three works. I don’t think I will get that much, maybe nothing at all, but I thought it was money on the table and when I saw the deadline fast approaching I thought I should throw my hat in the ring.

What I wanted to do in this post is re-activate a section of this blog. When I originally conceived this area of the blog it was to be a section where I spoke about the motifs that I use in my works, the components that make up the Red Wrath World. These motifs have their own history and territory; three Kingdoms of Power and a place I call the Hellish Realm. These are eras and places in my imagination in which the characters or motifs I create live.  I thought I largely explained these kingdoms, I didn’t quite get into the second kingdom so much, maybe I’ll do that another time. Here’s an image from an installation I did at the Cigar Factory in Allentown that shows a drawing I did depicting all three kingdoms of power along with the hellish realm: 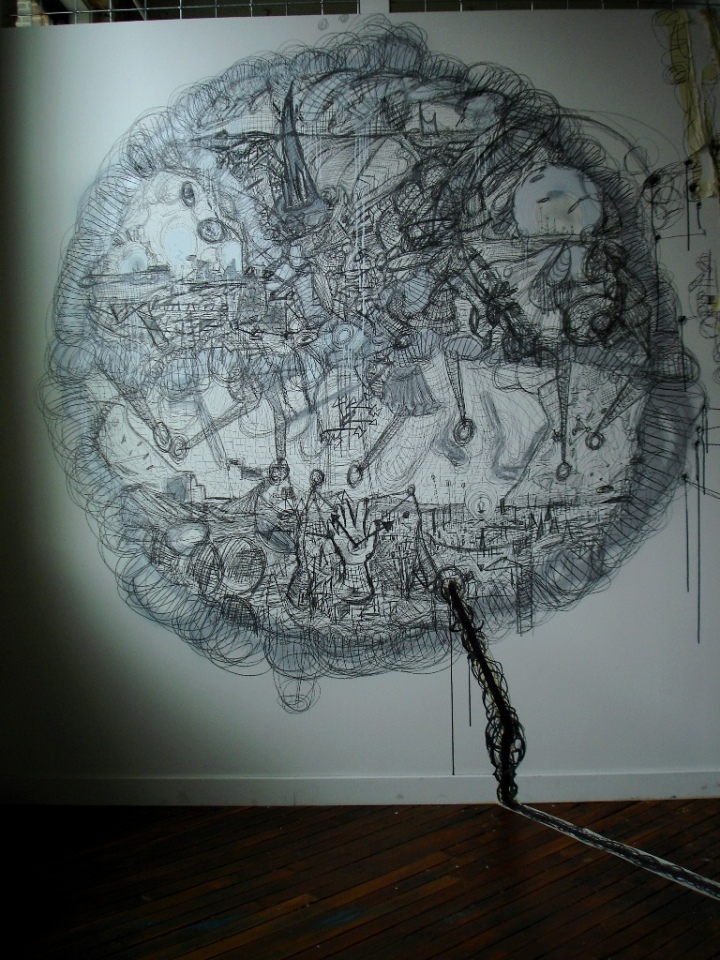 What I realized in Vermont recently was that while this image bank of references are important to me, they are largely opaque to the viewer and maybe not so important to delve too into. What they are instead are parts in an obsessive process which I think is far more interesting.

In Vermont I spoke with several visiting artists and my fellow residents in conversations where it seemed clear to everyone except to me that I really like to work a surface, maybe I overwork it. I don’t mind this obsessive hard drawing and painting that I do. Layers of density and complexity is largely the way I see the… well everything. That world view permeates many aspects of my life including my politics and my writing. I often enjoy taking a few more words that normal to say a simple thing because I think those extra words help me hit the bulls-eye of meaning.

I thought it would be interesting to show a few images from my  process. Here are some images of the making of the Hotness in Concert No. 1: 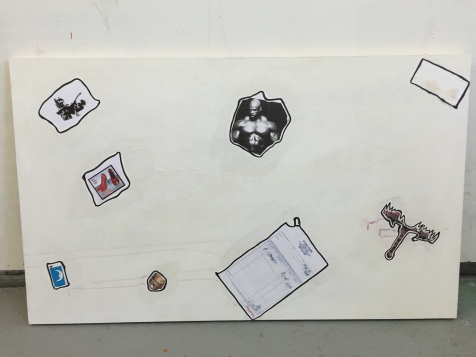 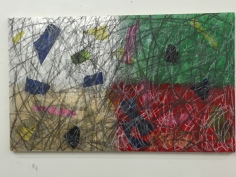 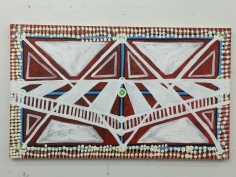 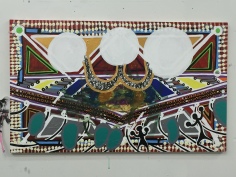 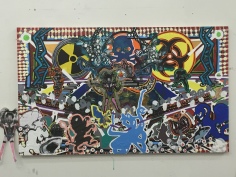 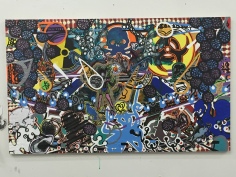 You can see the full slide show at my website at:

I think what’s happening when I do these layers is that I’m building the under-structure of the surface image. I’m providing a skeleton. Now I’ve thought a lot lately about why I need such an elaborate under-painting especially since there are drawings that direct the painting process pretty closely. I’m not exactly sure. I think it’s not so much for formal reasons. Maybe it’s because I truly enjoy the cat and mouse game of painting a complete painting and then covering it up. I’ve spoken of my secret paintings before. I m now getting use to the idea that this process – while somewhat formally useful – is also and maybe mostly an expression of pure and rapturous painting joy.

I’ve been listening to a lot of straight rock and blues lately and more M.I.A. Musically I feel like I’m always reacting to things that have been out forever, especially in pop music. The M.I.A. that I have for you today is from her record Kala. I love the songs “20 dollars” and “XR2”. Of course the hit of that CD was “Paper Planes“. Here are those first two songs in YouTube videos:

I’m also falling back in love with bluesy rock music . I discovered Robin Trower on Amazon Prime when I was looking for easy listening background music for dinner with my boyfriend Tim a couple nights ago. I fell in love with his track “Day of the Eagle”. Here’s a YouTube of it:

Okay that’s about it for me this post. A couple more notes. I’m trying slowly to professionalize this blog so I’ll be tinkering with it more over the next few weeks to see if I can reach a greater audience so please be patient. Finally I woke up today totally depressed over Brexit. I’m not British so I have no real dog in this fight. But the referendum seemed to show to me a victory of hate and division over unity and peace. I believe its a set back and that a smaller England and Wales will seek to rejoin Europe after the rest of the the UK dis-unifies. Ultimately I believe that our common bonds of respect for human decency and benevolence towards each other will win, but not without a fight from those who benefit politically and economically from discord. Be well!