The Red Wrath World is a conceptual framework for the style of work I make. It’s the place where my abstraction lives. This style emerged from an artistic crisis I faced in graduate school. I decided that the paintings I did in the beginning of school weren’t working so I began to doodle with black india ink. These black line drawings began to coalesce into gestures which resembled architecture and calligraphy.

I began to look at the works of fellow Michigan alum Suzanne Mcclelland and the heroic paintings of Cy Twombly, Brice Marden, Terry Winters, Gregory Amenoff and others and began to think of adding structure and a fleshed out creation myth for my works.

This creation myth I concocted centered around a series of gestures that I call characters. These characters each represent for me an idea or emotion. This creation myth began with a central character I called the “Queen Goddess”. It is this character who in the beginning of time expunge two thoughts from herself that gave birth to the rest of my creative universe. These two thoughts were “Desire” and “Fortune”. These characters were the first two of eight characters I created called the “Original Eight”. More on them later but for now a little about “Fortune” and “Desire”. “Fortune” is a reckless character disastrous dangerous and usually depicted as a many pointed red gesture in my world. “Desire” is a composed green triangular character who sadness binds hopeful spirits together. It is “Desire” that gives birth to the “Red Wrath World” and it is on this world that time is laid out in three ages called “Kingdoms of Power” and the “Hellish Realm”.

The works I create usually harken back to my creation myth in some respect, and I hope that the stories I tell in my paintings communicate a basic narrative to my viewers. However in truth these stories I tell myself serve as usually means to lay down colors patterns marks and collage in a specific order and usually on paper mounted to board. They’re my motifs, with often subliminal meaning for me. 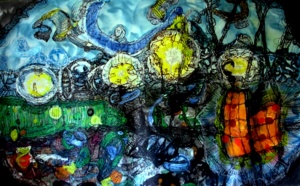 The three “Kingdoms of Power” and the “Hellish Realm” and the other characters and places in my pantheon of gestures are all subjects I will explore in more depth in future blog posts. After covering some of the background of my style over the next few posts I hope to catch readers up to where I am in my current work so stay tuned.