So we’re in week two or three at least of this new normal that’s starting to set in across the country and it absolutely sucks. Two things stand out to me about this particular moment that I regard as truly tragic and potentially unfixable. The first is the likelihood that social distancing will become the norm and a society that was already distant and remote and almost gleefully isolated from one another will now stay away from all human embrace as a means of perceived survival. The flight or fight instinct is very strong in most people and it is going to take a long time for people to feel safe enough to return to normal after this pandemic passes. The other and far more tragic thing I’ve noticed is the abandonment of the sick, ill, dying and dead. Due to a fear of contagion spread, I think the potentially 100,00 to 250,00 people that will die of COVID-19 will do so in isolation. Worse, we as a nation are so forgetful, ever mindful of the tragedy in front of us, that we’re likely not going to have that cathartic moment of remembrance of all the lost souls this disease takes. That’s why it’s more important than ever to settle affairs, say I love you, stay connected and remain deeply sympathetic and empathetic to people during this crisis in whatever way we’re safely allowed to do so.

Heres a lion statue I walk pass daily from my bus stop that I just love.

I’ve tried to do these social connection things and keep my diet of tragedy-porn (otherwise known as the nightly news) to a minimum. I, unfortunately, had to return to work and so I returned to normal painting patterns in my studio which is basically two full days in the studio. In my few days back to work, I have noted how truly ill-prepared we all are to deal with this disease on a practical level. It’s just impossible in a free and rebel country like ours to keep people inside. Folks go to stores not to get provisions needed for survival but because they’re bored and need to stretch there legs. It’s putting all those who work in service at great peril and is truly turning every careless shopper into a potential murderer.

Even with that said, on one of my days off last week I did take a walk in the park with a friend – of course observing social distance – and I could see just on a personal level the ill effects confinement has on the spirit. America is on house arrest but there’s no parole officer enforcing health guidelines, making the tragedy of the death toll all that more difficult to bear because we are all likely unwittingly passing the disease along to a person who will die of it, and it will be our faults. 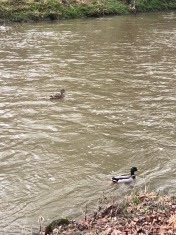 On my walk with my friend – my ex actually – we spoke of the paranoia we were both experiencing. I spoke about my housemate Michelle who is certain I will catch corona from my job, and is also determined to sanitize her Facebook of all raciest-antiscience Trump-supporters. My ex told me about how his penchant for alienating his friends, in this case his housemates and new boyfriend, has reached new heights. Now he’s microwaving money because, well money is pretty dirty. Also there’s hand sanitizer at every door.

We saw some ducks on our walk and I thought about how this moment, a tragedy for humans, means nothing to the ducks and other creatures. Its spring to them. The weather is getting warmer, trees are starting to bloom. The earth is coming back to life as we isolate ourselves from it. Satellite photos of regions around the globe known for pollution now look green once again. Someone told me dolphins and swans are returning to the canals of Venice and the water is cleaner than it has been in decades. So is corona that much of a scourge?

Well of course it is, and a very predictable one at that. Who we elect matters. I can’t help but to think Clinton would not have bungled the nation’s response to this tragedy as much as Trump has. So many lives lost because Dr. Trump though COVID-19 was no worse than the flu. While I’d like to think that this pandemic will serve as a lesson on the needs of preparedness I know because of the lessons we didn’t learn from 9/11 and the financial crisis, that people will forget about this and move on to the next thing. People will continue to think, inextricably, that the government – that is doing its inept-best to tackle this crisis – is somehow the problem.

I finished two little Maxatawny Stitzer pieces this week shown below. They’re Maxatawny Stitzer Nos 2 and 3 respectively. I thank god that I have access to my studio during this time. It makes going through this whole thing bearable. 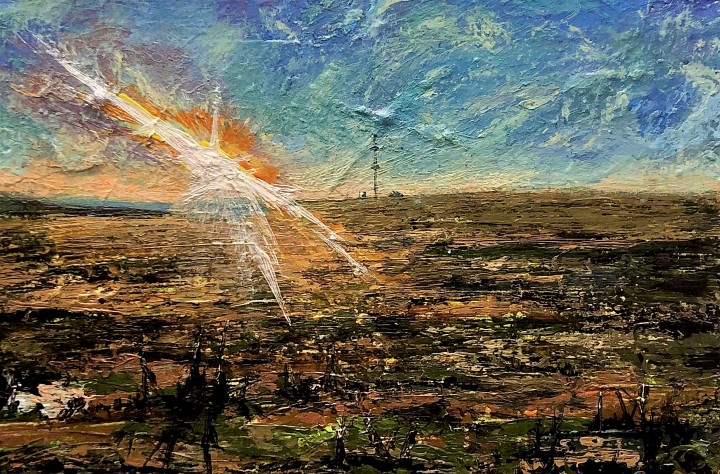 One of my favorite artists, Thundercat, released a new CD yesterday just in time to take my mind off the tragedy and saved me from binging too much on NPR. The new record is called “It Is What It Is”. The two tracks I like the best so far on the CD are “Miguel’s Happy Dance” and “How Sway” both of which seamlessly flow into one another. Here are some YouTube videos of the tracks.

I had some great success with my last Gnostic Confessions piece and am already hard at work on the second piece in the series. I think I figured out a way to blend several motifs in the piece and I’m excited to experiment in the work. I think I’ll be able to tear into it hard next week. When I do I’ll blog about it. Until then do be well.