Its been a while since I’e written a post and I think the reason has been two-fold. First I finished my series of paintings on Longwood Gardens and have felt a little empty and tapped out of inspiration. The other reason has been the election. I’d wanted to speak about issues regarding the election specifically Donald Trump’s despicable use of Bill Clinton infidelities and Hillary Clinton’s response to Bill’s transgressions during the campaign. That attack was lodged in full about two weeks ago but it feel like it was a million years ago given the fast twists and turns of the election. The anxiety of this process has been really immobilizing and depressing to me, I’ve found myself sleeping more often and going on and off media fasts. As much as I am a politics junkie I have to admit that I’m relieved that today is election day.

So last Friday was First Friday and I did manage to take my notes as normal so that I’d have some content to blog about. This last open house was held during the InVision Photography Festival and the crowds were tremendous, the best I’ve seen in months.The night began with the typical pre-event happy hour with artist resident’s Deb Slata, Alison Bessesdotter and Erin Anderson. We discussed  the scary election season and camping which I love to do. Once the night began my first visitors were a couple from New Haven Connecticut, who were both impressed with the Banana Factory as an institution saying surprisingly that nothing like it exists is their region. I’ve been there and have seen some artist buildings but they’re right that they don’t quite have a venue like the Banana Factory in the New Haven region. Artists buildings there are much more on the model of the spaces in New York which are essentially spaces to work without much programming beside maybe a yearly open house. The couple gave me some perspective on how lucky I am to be in this space.

The election continued to be a theme throughout the night and one of my visitors was a democratic council member from Bucks County.  He mentioned again how scary the election was and why it was closer in Pennsylvania then the polls suggested, being a polls junkie this depressed me a little and so I moved onto one of my tasks for the evening which was giving printmaking demos. I demoed relief printing and some monoprinting and brought up the press from the visual arts classroom to my studio. And so throughout the night I showed visitors how to make prints and gave out prints to whoever asked for one.

One of the most thrilling experiences of the night was when Berrisford Boothe brought by the African-American painter James McMillian to visit. Berrisford is putting together a collection of significant African-American artists for a private collector and McMillian is to be the newest addition to the collection. McMillian has had a storied career as the head of the art department at Howard University for many years and as the first black person to attend the prestigious Skowhegan artist residency in Maine. Here are some pictures of McMillian’s work. 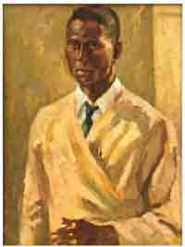 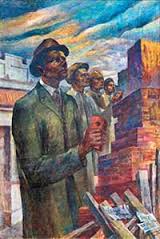 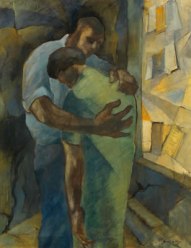 Here’s are a couple photos of the artist: 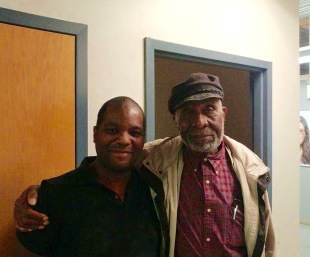 Meeting James McMillian was a great pleasure and I am very honored that Berrisford thought to bring him by to introduce him.

Lets see what else happened last Friday, I received another visit from my friend Tyrone Webb, who was also there to meet James McMillian. Tyrone gave me an update on his divorce, which is finally proceeding somewhat amicably. I’m so happy for him that he will be getting some relief from that past pain and can focus on continuing to be an awesome father to his lovely daughter.

As the night came to an end several more visitors stopped by. The artists Femi Johnson and Tony Seinzant stopped by along with the blogger Michael Phoenix and the last visitors were a group of folks from Allentown who received my last print of the night and who I commiserated with regarding all the construction work taking place on the streets in Allentown, a nice little bit of neighborliness to close the evening.

After I closed the doors I have a chance to hang out in the studios of David Sommers and Darrel George which made me feel like the evening ended well and on a good note. Here are some pictures of the studio from last Friday minus the press. 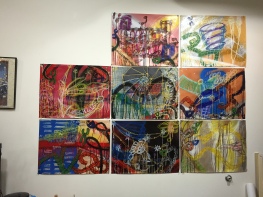 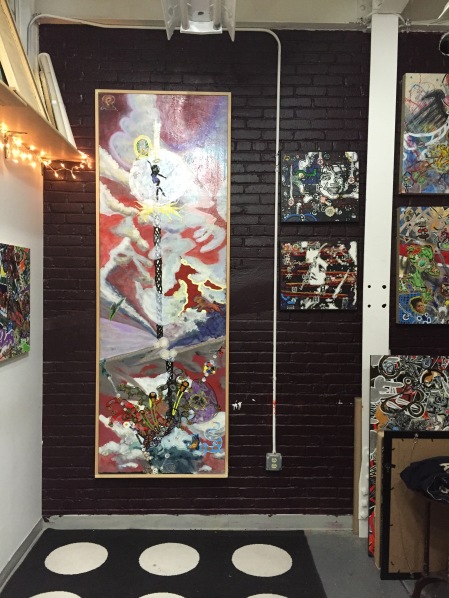 Because of my general malaise both due to my studio practice slowing down and the election I haven’t been listening to a lot of new music lately. Last night I felt an ear worm for Jill Scott and D’Angelo and so here’s two songs from their most recent albums. Here’s Jill Scott’s “Can’t Wait” from here album “Woman”, and D’Angelo’s “Another Life” from his 2014 record “Black Messiah” which I think I included once before but its so good so here it is again.

Okay that’s it for now. I believe as the election passes my inspiration will come back and I’ll be onto another art project. I expect to receive my state grant funding to finish my Pilot Set of painting later this month and will be gearing up the studio for that and so I will certainly blog about it when that occurs. So until then do be well and please vote today if you haven’t already.

Sartorial stealth and effective living for the self-made thousandaire.

Because no one deserves to be in a box

Beer with a Painter

A conversation between contemporary artists and their influences across time.