What makes a presidential administration successful when it comes to the arts? What are the metrics we use to say this president was a artistic philosopher-king and that one was a philistine…, an artistic neophyte. Several months ago I sought a way to gauge this years crop of presidential candidates on their support for the arts. What I learned in my simple overview was mostly that this is a not issue for the candidates and the public. That doesn’t surprise me; though it does instruct me that intellectual and spiritual nourishment through the arts will for the most part continue to be a low priority for people; hungry though they are for something more to live for than their jobs and families. And so after looking at the presidential candidates in the primaries I proposed to look at the Obama administration’s accomplishments in the arts over the last seven and a half years.

I thought that the most important indications I could glean and the easiest to report on we’re the funding priorities in the NEA and Department of Education. I thought this because looking at the art produced, while it could give an idea of the administrations priorities, is simply too subjective to parse; at least for me. I additionally decided to look at who Obama appointed at NEA and what they’ve said in office to give me some clues as to what their agenda was during their tenure and finally what the president himself has said about the value of the arts and arts education. This all quickly grew to large for me to consider at once so I though I’d report on Obama’s artistic musing in another post.

According to statistics from the National Endowment for the Arts and the U.S. Bureau of Economic Analysis the arts and cultural production contributed $704.2 billion to the U.S. economy which is about 4.5 percent of of GDP. To help fund and stimulate these figures the administration, in its first years, budgeted on average around 150 million dollars a year before sequestration. Afterwards funding shrank to 138 million in 2013 during sequestration but quickly recovered. Since sequestration was relaxed somewhat funding stabilized to around 145 million with the current proposed budget for the NEA at 147 million dollars. Department of Education funding has stood at an average of 70 to 80 billion according to public appropriation figures from the Department of Education during the Obama years. These numbers are important because with an investment of under 10 percent if we include all Department of Education funding – of which only a small portion went to arts education, the arts reaped 10 fold its initial investment, which I believe to be a good return.

As far as what leaders in the NEA and the Department of Education have to say in support of the arts I’d like to quote here two long passages which showcase their priorities I believe. The first is from the inauguration of NEA chairperson Jane Chu:

Creativity and innovation is at the heart of what America is all about! And it’s at the heart of the NEA too, especially in two main areas. One of them is arts education. Numerous studies show that students engaged in the arts perform better academically, socially, and participate in other civic activities. Arts education is critical to raising America’s next generations of Creative, Innovative thinkers. The other area we will further delve into lies at the intersection of art, science, and technology. We believe that synthesizing these differing perspectives can foster those Creative and Innovative thinkers to help us solve problems, think out of the box, and provide new insights. We want to turn the focus from STEM education to STEAM education, and integrate Science, Technology, Engineering, Arts, and Math into our nation’s classrooms

And now here’s Education Secretary John B. King speaking to what communities can do to inspire kids after the recent spate of shootings involving black men and the police:

Students first need to hear from us about finding what gives them hope. We know what hopelessness feels like. We both lost our parents at an early age, and struggled through feelings of emptiness and loss. Whatever happens, our children cannot let their dreams give way to a sense of futility. For us, we find hope in the remarkable accomplishments of young people. Students may find hope by expressing themselves artistically or striving athletically, in reading literature, in their own writing, connecting with friends or organizing a peaceful protest. So, we should encourage them to find reasons to be hopeful, as well as opportunities to share their feelings. But, we should also help them realize that they have it in their power to make changes in their own lives, the lives of their families, and in their communities.

Okay so what I’ve gleaned from my simple overview at these comments and funding priorities is that the President has been attempting to right the boat after years of under investing. NEA funding for example rarely went above 130 million under George W Bush’s administration according to the NEA allocations I looked at online. I also leaned that the investments made pay off huge dividends. Additionally there seems to be an important acknowledgement by the leaders of these two organizations that creative expression is expression and needs to be offered, especially in schools, to give voice to the voiceless. Again when I return to finish looking at the Obama Administrations record I will look at what the president himself has said in support of the arts.

My studio mate and friend Darrel George showed me a video early in the week of what he considered the best rap video ever and when I saw it was of Kendrick Lamar I had to see it. Its a video of the song “Never Catch Me”. Here’s a YouTube video of it.

Okay that’s it for this post. Again I will look at Obama and the Arts in a future post. Next I think I’ll document my exhibit at the Bradbury-Sullivan Center in Allentown. Here’s an image of my print Johnson Family Values on the wall of my friend Anthony Falcetta’s living room. 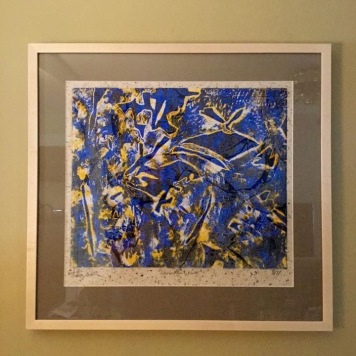 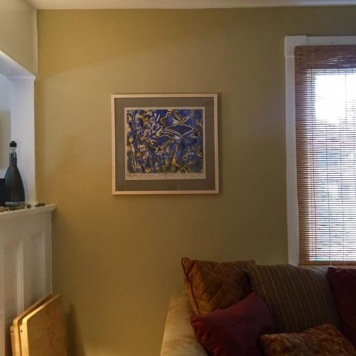 Until next time do be well!