Its been a busy couple days since First Friday and I’m just now catching up on blogging about it. The open house this month was pretty steady for me with tons of folks coming in the beginning of the night due to an ArtsQuest event downstairs and it petering off later on so that I could have really good conversations with people as the night progressed. Here’s a look at my space right before we opened the doors: 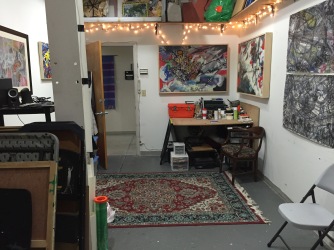 The night began with me thinking about how  people engage with artists during First Friday. Its occurred to me that the public kinda just wants to look and peek in on artists at these events and would prefer not to engage. In my little notebook where I keep all my First Friday notes I wrote down “looking is unfortunately free”. We artist spend so much time thinking about our audience, even if its an audience of one, ourselves. When we dwell on the fact that that audiences have been conditioned by media or just by their own habits to swipe left as quickly as possible where does that leave the artist’s work? When faced with the daunting challenge of just getting another human being to engage with your creative output its easy to see why many artists quit making work. I think those of us who do still produce have a special type of madness or in the case of my studio-mate Darrell George, extreme ingenuity and long-term planning.

The night progressed with lots of interest in the City of the Dead drawing that I did at the Vermont Studio Center. I think people were most interested by the line work and layering in the piece. I found myself trying to explain the inspiration behind the work before realizing that the inspiration is irrelevant to all but the most determined viewers. I can get pretty wonky in describing my own hermetic universe; and though people were mostly polite in listening to me, I realized by the end of the night that a brief very general explanation of work is all most people want and need.

I got compared to Jackson Pollack last Friday, which was out of the blue and completely mistaken in my opinion. I felt at the time the complement…, I think it was a compliment, showed the lack of arts education out there in the public. I felt a little mad at education policy after hearing that comment actually but it was a small affair and I thanked the woman who said it and invited her to eat some snacks. By the way, with the exception of some little rugrats dive-bombing my Oreo’s, I didn’t have any visitors using my studio refreshments for dinner. I think I found the balance between offering too much and too little.

I received two sets of visitors of note at the open house. First there was the Executive Director of the new Bradbury-Sullivan LGBT Community Center in Allentown, Adrian Shanker. And second there was John D Goodwin and his entourage, an archetypal fabulous gay couple. Adrian was great, very complementary of my work particularly of the series “Matthew Likes Darkies Best”. In fact let me take a moment to say that Adrian was one of the few viewers that got what I was trying to do with those works without me telling him how to read the pieces. A good lesson for me in learning to trust that people get it. As the exec at the gay center he just about ordered me to show their and I am very excited to work with them to put something together in the next few months.

John and his fab gay friends were a huge boost to me at the end of the night because they were professional gay creatives like myself. John teaches animation I believe at the School for Visual Arts in New York, and he was giving me some good advice on developing some digital skills. I’m intimidated by the digital like most of the public I feel, but he gave me confidence that I could get my feet wet by learning a few choice programs like the In Design Suite. He even suggested  I could probably teach something on digital media after learning some basics based on my previous teaching experience. That was very heartening to hear. I shouldn’t overlook mentioning the gay couple he was with whose names escape me right now…, I have their cards somewhere. Anyway I though they would make a fine couple for me and my partner Tim to hang out with to get us out of our circle a little.

The night ended with a nice smattering of folks and a visit from fellow Banana Factory resident artist David Sommers. Dave and i don’t get to see each other too much due to our schedules but he absolutely captivated me with stories of his recent trip to Guatemala. Dave works at Moravian Academy in Bethlehem and took a group of students down their after the school year ended. While there Dave visited Tikal which is an ancient Mayan city and I was fascinated by how large he says it was and how suddenly it an much of Mayan culture was lost to time. Now that summer is here and Dave’s trip is over I look forward to hanging with him more.

Okay that it for this post. For your listening pleasure I have this remix of a Jill Scott song that my friend King showed me on YouTube last week. Its of her song “Cross My Mine” and it was remixed by this cat Mikula. Hope you enjoy.

Okay next time part two of the three part review of those VSC recommended artists. Until then be well.