When I attended the applicant interview for my studio space at the Banana Factory back in February of this year I told the selection committee that I thought I would do a large set of drawings based in part on a forboding masonic temple in Allentown. I call that building the temple of doom because it seems so ferocious. Here’s a pick of it:

It took me a while but I finally began the series. It’s the first in a series of I think 10 drawings. I’m trying to limit the color pallet for the set just to challenge myself, and I’m also working larger than I thought I would. I became obsessed with doing a large drawing set after setting my sights on these 48 inch square plywood boards from Home Depot. Unfortunately 48 inch square doesn’t fit in my car so I’m settling for about 40 x 43 inches – which after some trial an error at the cutter -managed to fit in the car.

The first piece in a series is the discovery piece for me. I often call this piece the chapter house because it usually contains much of the visual motifs that go into the work. This piece was unwieldy suggesting the series will be a challenge. I suspect the anticipation that’s gone into making this one series will continue to plague its execution, but I remain hopeful that it will go smoothly. Already the expense is a challenge since good working pens are pricey and don’t contain all that much ink. It might mean some slow going but I can use the extra time to situate all the rest of my work I’ve made lately into shows. I’ve built up a big inventory that needs to go out their in the world I feel. In any case here’s some videos of music I’ve been listening to lately:

Okay and here’s some shots of me working on the first piece of “Behold, the Loathsome Temple of Doom” 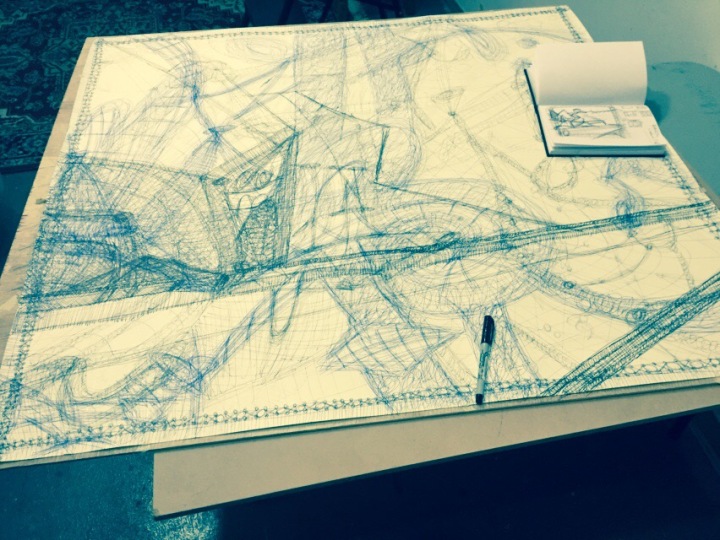 And here’s the finished piece.

Okay guys until next time…be well!