I finished the Coates book “Between the World and Me” last week in my studio and was nearly to the point of tears by the end of it. I wanted to give a scholarly report or response to this work but for the sake of time and my emotions – it was that turgid –  I’d prefer to give my impressions. The summation of this beautifully-written and piecing work was for me: 1) the nature of white supremacy is that it is insidious, structural, and often subtle, 2) struggle against this system is a fact of life for people of color and a bleak one at that, 3) the suffers of racism throughout history were people with full lives and ranges of emotion and not stepping stones towards future generations actualization as full fledged humans, 4) enlightened whites dimly understand how they benefit from the system as is, and react violently or with suspicion and with poor contrition to suggestions they benefit from the present system, 5) blackness comes in a wide variety and blacks should take some comfort in their being deeply understood by their black fellow travels, and 6) the author feels wounded by the system he was born in but has high hopes for his son’s ability to navigate our racist society. These were my initial takes on Coates work. I found the work like a cold shock, or a dose of super-reality.

Ostensibly a warning guide of this-is-the-way-it-is-isms for his 15 year old son, I found the most piercing reflections of the book were in fact his sense of having been wounded by his experiences yet feeling the need to solider on. The account that Coates himself and the media seem to focus on quite a bit is the controversial murder of his friend, Prince Jones, by a dirty black cop from Prince Jones County Maryland. But for me it Coates’s recount of how defeated he felt after a bad encounter with a woman (feeling the full power of her white privilege) in an altercation involving the woman and his son was the most powerful retelling in the book. Realizing, after he became mad, that he could not rise to the same level of righteous indignation as the white woman (because her side would be taken by authorities and he could land in jail), Coates speaks with soul-searching eloquence about the shame he felt later at putting his son at risk of not having a father. I thought of this episode as perhaps the most sincere recount of a father’s love for his child that I’ve read in print since I read Cormac McCarthy’s “The Road”.

I had several reoccurring  feelings or thoughts while reading the book that I’m only beginning to grasp. I thought for a long time about an ex of mine whose deep and brilliant read of the media, and society at large reminded me of Coates analysis, this ex is also a thoughtful black writer. The other thought I had, one that I dwell on a lot these days, is how much the structure of race and class has effected me as an artist, that is to say what are the invisible structural forces that have perhaps hampered my own art career, or fueled it as a source of inspiration. Lately, I’ve also thought about my mother and the abuse she suffered at the hands of my step-father and how she left college to be with this man. I thought about how her dreams had been early differed by her own mother who told her that she had better learn a trade and get a man rather than go to school to be a writer as she had once confided in me was her life’s dream. How different might her life been if she felt that there were more options available to her and encouraged by friends family and society at large to pursue those dreams. My feelings regarding the book have generally centered around my powerful naivete about issues regarding the magnitude of race and poverty in the country and my fanciful notions that solutions simply require perceptual change and not tough work. Coates himself calls whites “dreamers” regarding what they feel about their own whiteness and how racial progress can occur, and frankly since I’ve spent basically my entire adult life mostly around white people I suffer from many of the same delusions.

On this last point about delusions and solutions to change the system, I like to speak a little about my reaction to the Black Lives Matter recent interaction with Hillary Clinton. Clinton’s reaction was inelegant and a little lawyer(ly) but her assessment I thought was spot on and the BLM members grilling her were I felt a little unfair in their attacks. Her assessment were from my read that  1) contrition is not enough to ask for from whites, even whites folks that may have on a policy level, enacted programs that harmed the black community, and 2) the BLM movement needs clear messages that they can use to lobby policy makers and move the society at large to action.The BLM protesters took Clinton’s assessment as victim-blaming which I think misses the point. It was victim-blaming, but she still spoke some real truth. Movements need clear messages and attainable policies. They also need open access to policy makers to change their attitudes. Black leaders in the past understood that they poison the well by continually antagonizing the policy makers they want to move on issues with demands they feel bad about their white racism and with protesters ill-defined goals. Additionally, Clinton’s, defensive “come to me with policy position” was a predictable candidates response that BLM could have easily anticipated and countered with the groups stated goals from their many websites. Knowing that they had a rare forum with a reluctant-to-speak candidate, they should have been more prepared in my view. Here’s a YouTube of the BLM encounter with Clinton.

Anyway this was my take on Coates’s book, I seem to get exorcised over race issues so I’m sure I’ll return to them again. Here’s a snapshot of Pilot #5 so far to close this post. See you next time. 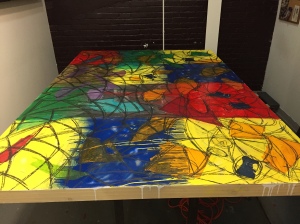 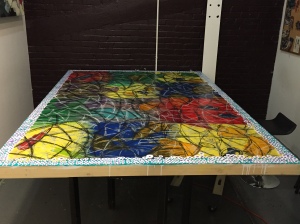