I’ve been trying in my mind to thread two different items I’ve seen online lately so here it goes. The first one comes from one of my favorite hiphop artists Azaelia Banks. She just gave an interview to British TV station Channel 4 where she mostly spoke about how she’s perturbed about cultural appropriation. I think she smartly distinguished why in light of a seeming war on black bodies being waged by law-enforcement it is particularly upsetting to see those in the majority lampoon blackness by adopting black cultures most uncoof behavior. Here’s the link to the interview http://youtu.be/8PIgbeVC6hQ

The other item is a post by my friend Max Gordon on the strange situation of being a double minority, in this case black and gay, at a time when both identities are being besieged again by the majority. You can find his essay here.

In both cases uncomfortable and traditionally-minded majorities -seemingly devoid of culturally specific legacies to draw from for new inspiration – persecute minorities. Again my thoughts on these issues are mostly unformed and the complicated  issues addressed in both of these Internet posts represent long standing concerns in this country. It’s just on my mind lately and I can feel it seeping into my art. 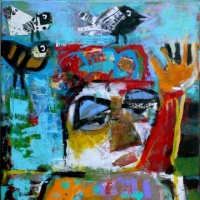